Ser WolfDoge, an honest mighty knight. Was now venturing through the chaotic lands of Lothric, for he had been chosen as champion of ash destined to link the fire.

His quest was to bring ‘em lords of cinder back to their thrones, using any means necessary.

Despite the lack of speed and agility his quest was progressing at a pretty solid pace.

He tore through the enemy ranks, literally sending all type of hostility flying or shaking. It mattered not if t’was large fire breathing demons, local farmers or bad ass looking knights. They all sooner or later hit the dirt.

Then all of a sudden a red appeared from another world.
T’was one nasty dishonest fella armed with the storied META-gear. Probably sent here from the tryhard clan to put an end to our champion.

Whilst bowing to his new foe, he saw how it took some dope to improve its stamina and dps.

Early on t’was very noticeable that this was a skilled warrior, who definitely knew how to dodge, doing solid side rolls on each vertical swing of the great greatsword. Our champion grew more and more tired, for each swing demanding a huge portion of his stamina.

Then all of the sudden the red managed to roll up behind him.

He got a sever stab in the back by the red’s chaotic dagger. The massive loss of blood was all too present. With blurred vision and weakened strength he tried to create some distance, but once again the red showed true skill, perfectly catching him in his slow dodging attempts with its fine looking straight sword.
A few seconds later our champion was slain.

As his spirit left the body he saw how the red was throwing bags of poo on his corpse. A nice gesture? I think not.

Moments later he respawned at the latest camp site. Lost in the thought of these recent events, he just stood there looking at ‘em flames. Then after what could’ve been anything from one hour to one minute he went and decapitated the Ethernet cable. Breaking any links to other worlds.

‘Round ten hours later he had; been crowned new lord of Cinder, schem’d with his blind but very helpful associate to break the ongoing fire cycle, freed this small kind painter in the lands of Ariandel from the evil, corrupt, pretty hot Friede and her lame, overweight, metal singer dad, walked through the land of “everything mashed together”, chopped his way through the dangerous yet cool streets of the ringed city, slain an OP dragon that’d forgot its duty, and finally having an honest mano a mano duel at the end of the world with this red hooded hobo-looking knight over the pigment they’d both promised bring back to the small kind painter.

He never told the small kind painter that he for no real reason had killed her uncle nor that the uncle in the end had converted to cannibalism.

An honest knight knows that some things are better off left unspoken. 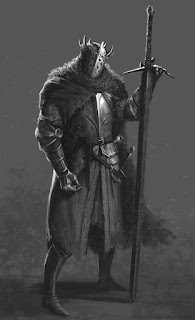 Hello I'm Mattias sort of. If you have any questions or want to hire me probably for drawing or paintin send me an email at: Baconstrapur@gmail.com